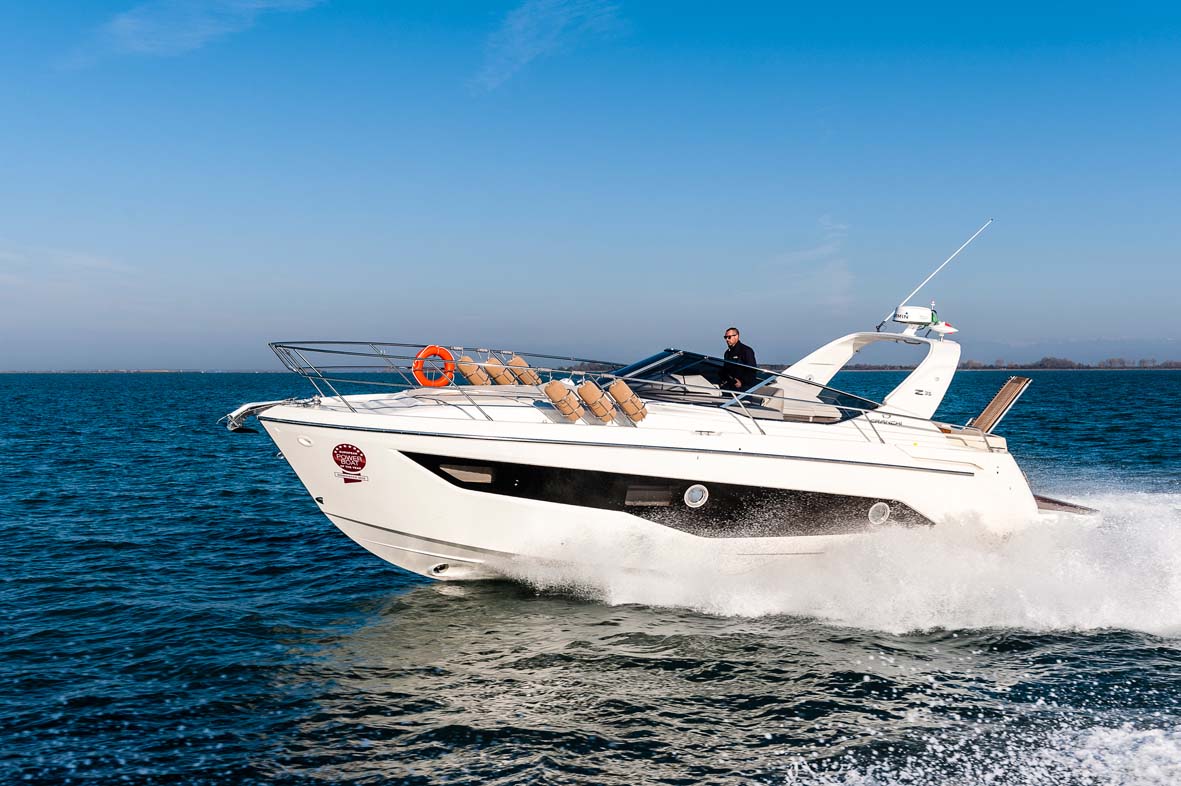 Arguably the first impression people will have when boarding the new Cranchi Z35 will be that of a surprising amount of space. In this instance it may be a classic case of under-promising and over-delivering, because despite the Z35 model name, this boat is actually just shy of 38 feet long overall.

Being an open boat – yachting’s equivalent of a convertible – possibly adds to that sense of spaciousness in the cockpit, which is where owners and their guests are likely to spend most of their time on board.

The cockpit area is laid-out in a practical manner with a large C-shaped sofa on the port side offering seating around a table, with a wet bar opposite on the starboard. The cockpit table can also be lowered to create a large sunpad. Access from the swim platform is through a small transom gate that features integrated storage for the wash hose.

A ‘roll bar’ supports electronics, and provides the structure to which the bimini top that covers almost the entire cockpit is attached.

The helm station is up a step on the starboard side, with a sunpad opposite for a little extra sociability while underway. Clearly a lot of thought has gone into the ergonomics of the helm station, with a sensible relationship between seat, wheel and engine controls. 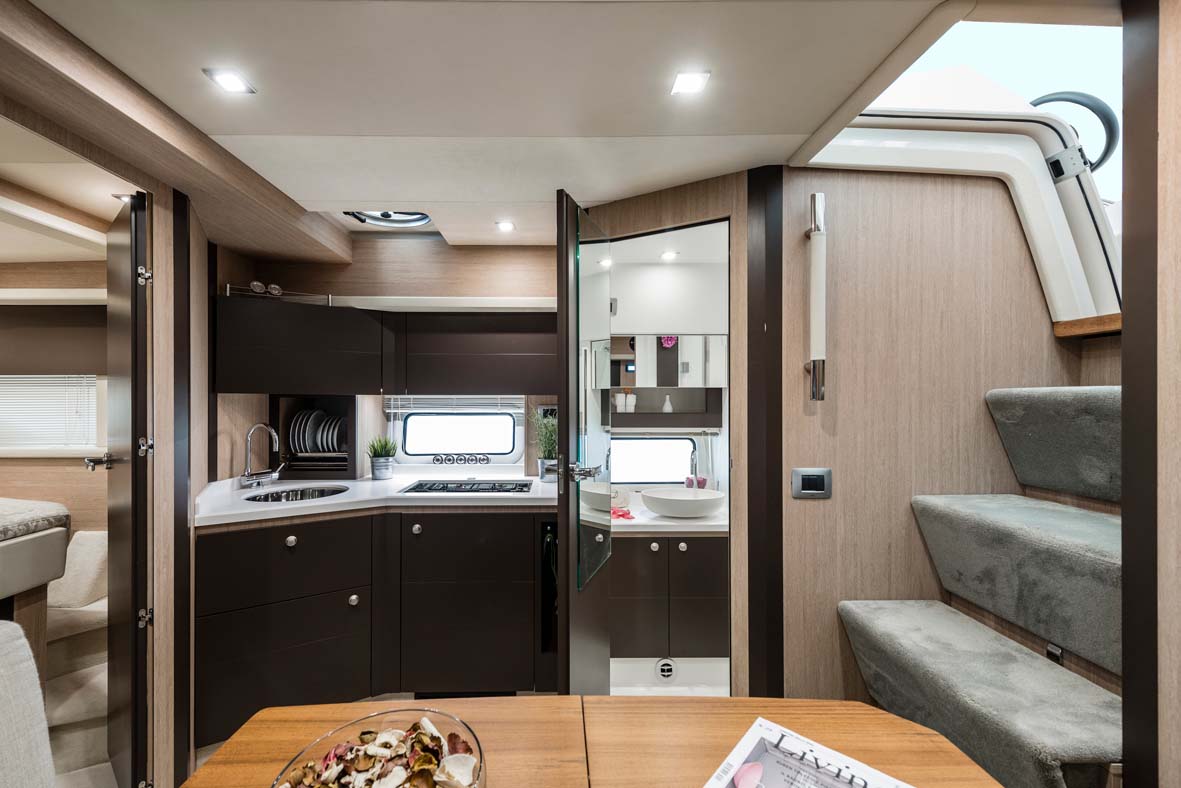 Access to the bow – which features another large sunpad – is by the usual gangways around the cockpit, or for extra safety, up some steps and along a teak walkway through an opening section of the windscreen. It’s a feature found in many smaller motorboats, but makes a lot of sense in this application too.

Family safety was obviously a priority in the design, with sensible high rails around the bow, which feature integrated storage for six fenders – a smart space-saving idea for a boat this size.

Below decks is also surprisingly spacious, with plentiful headroom and two comfortable double cabins, and lots of natural light with hull windows for all cabins as well as four opening portholes midships and ceiling hatches in the dinette and forward cabin.

It is difficult to say which should be considered the master cabin – the forward cabin is a double berth only, but the midships full-beam cabin features a pair of single berths and an infill cushion that converts it to a double as well. In the forward cabin there is access to both sides of the mattress, though if you were expecting a noisy night at anchor then the midships cabin may be the preferred option. 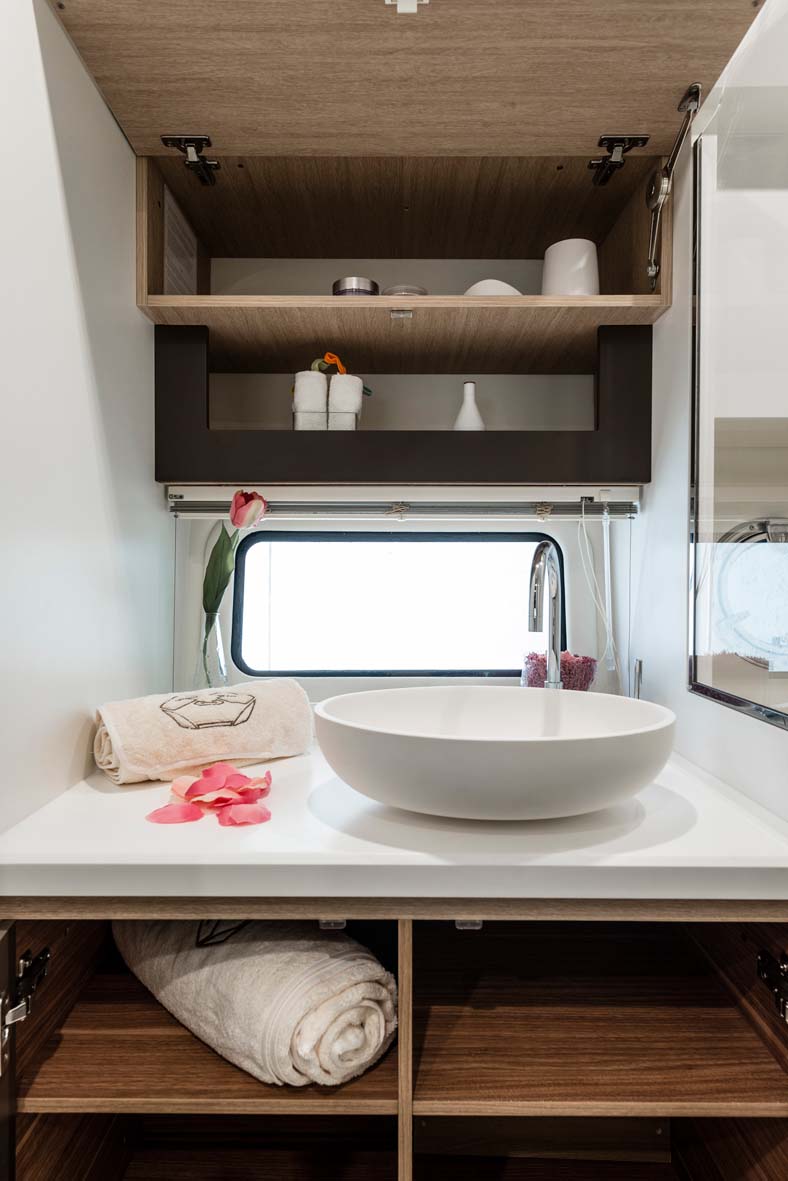 Between the cabins is a dinette that can double as another berth with its collapsible table and there is a well-equipped galley opposite. The one bathroom is shared.

For most Singapore-based boaters the Z35 offers a very sensible design – the open cockpit and spacious bow area is ideal for cruising and entertaining with up to 12 people on board, and a couple of berths for those occasional overnight trips for up to six, or simply to shelter from our occasionally inclement weather offers that extra bit of practicality.

Performance-wise she is also an ideal fit, with dual Volvo Penta D4 260hp diesels providing enough power to see a top speed of around 34 knots (with fuel consumption at 98L per hour), and a more comfortable cruise speed of 26 knots (for a more reasonable 67L per hour fuel use). Plus with the high freeboard it should offer a dry ride in the cockpit too, despite that open top.

And as with all luxury yachts, it is the details where the Z35 stands out, from the anchor wash in the bow to the Cranchi-designed crockery, to the quality of the woodwork and hardware, you are always aware that you’re on a yacht that benefits from the experience of a yard that traces its history back to 1870, but that hasn’t rested on those laurels – Cranchi invests heavily in research and development and cutting-edge production technology.

The result is good things – whether they come in 60-foot or even 38-foot packages.

See this for yourself when Hong Seh Marine showcases it at the Singapore Yacht Show, April 6-9, 2017. 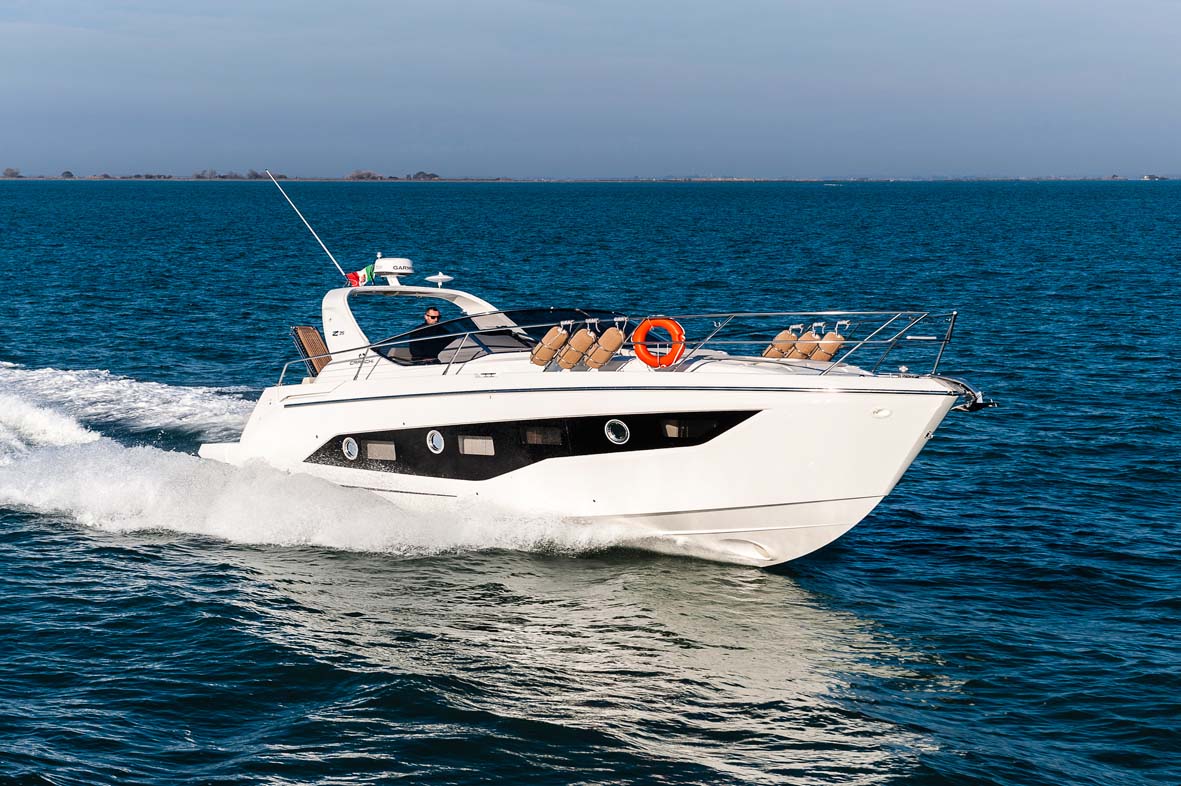