Conservation houses such as the early 20th Century shophouses are enjoying rising interest. Their new owners see them as the perfect canvas for inventive spaces by combining heritage with contemporary design ideas

Shophouses are structures offering unique details, which differentiate them from the glass-and-steel structures of today. Many were built between the 1840s and the 1960s and play a significant role in our architectural landscape by providing a sense of nostalgia. In a globalised world where many new buildings mirror styles around the world, they offer a sense of place for what the country was before its rapid development. From the distinguishing five-foot way to the ornamental details that provide a glimpse of the times, each shophouse has its own appeal.

Even as the rest of the property scene remains muted, shophouses have enjoyed steady demand. Aside from their generally prime locations, these properties, some might say, generate their own buzz by virtue of scarcity.

“The conservation houses were probably ‘contemporary’ during the era they were built. It is natural that as our lifestyles change, the material sense of the world evolves with the times. This should add to the vibrancy of our architectural scene. However, certain traits of these houses define their characteristics; and it is the architect’s role to retain or to enhance such characteristics,” says Chang Yong Ter, founder of Chang Architects.

When the Urban Redevelopment Authority gazettes shophouses as conservation buildings, there are strict guidelines to follow in restoring or renovating the structure. Much of it has to do with the façade. There are six shophouse styles, with the oldest being the Early Shophouse style of the 1840s to 1900 and the newest the Modern Shophouse Style of the 1950s. The shophouse of the specific era reflects the times with the ornamentation, materials, height and design used.

The old-world charm of the structure and façade appeals to modern-day homeowners. At the same time, they prefer to combine it with the conveniences and styles of today. “The considerations when adding contemporary aspects or touches to a conservation home can be viewed in two ways. The first way is to find ways of subtly integrating modern conveniences and necessities, trying to seamlessly meld modern touches so that the final result is as unobtrusive as possible. The second manner is to embrace the juxtaposition of modern and classic, to allow the old meets new to become a feature within the conservation home. Ultimately, it is something subjective. It really depends on taste. As architects we try to present the options to the homeowner, allowing their inclinations and preferences to be the ultimate guide in how they want their home to look and feel,” says Maria Arango, who with Diego Molina, are both directors of the 17BR-House project with designer Tomas Jaramillo. 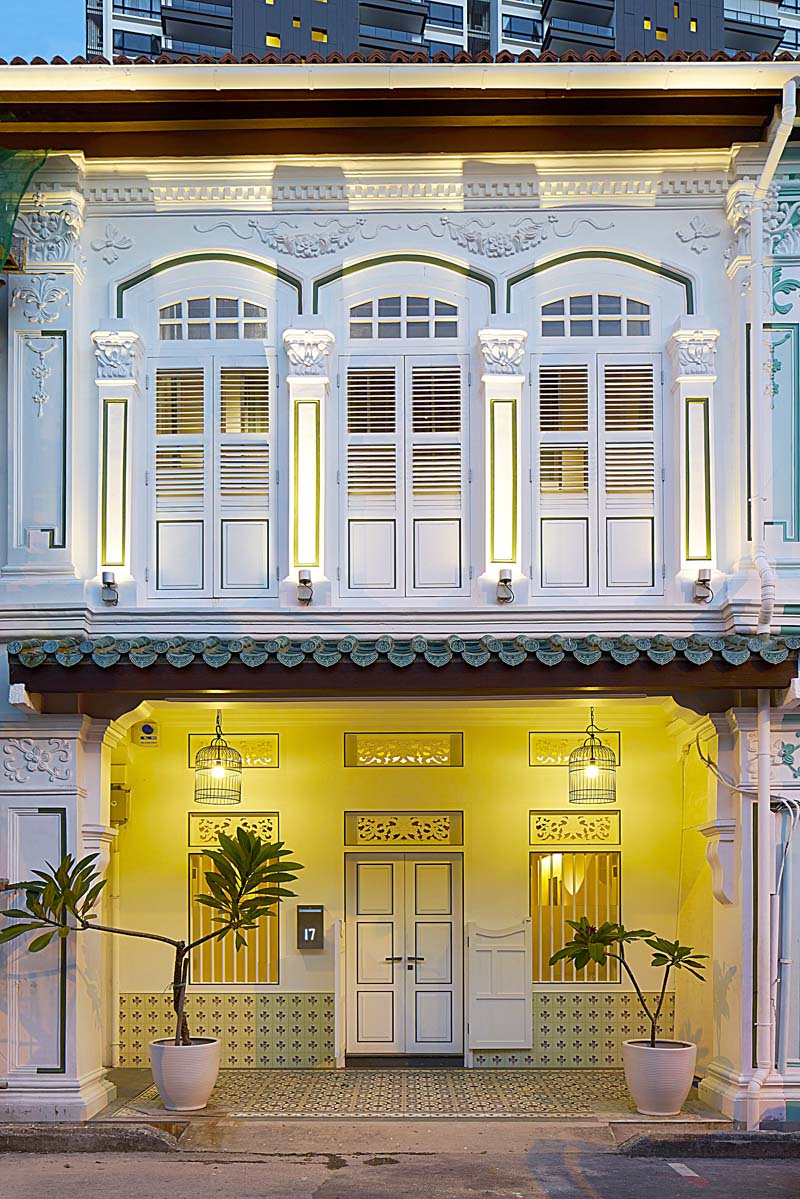 Located within the Blair Plain conservation area, 17 BR-House was built in the early 20th century. Over the years, it had been overhauled for office use, and so had lost much of its original architecture. The team from Ong&Ong transformed the shophouse into a family home by upping the sources of light with a naturally lit courtyard and skylights above a massive geometrical staircase.

In another shophouse nestled in the Geylang area, HYLA Architects placed an oversized spiral staircase in red under the light well. This staircase, appearing to rise out of the blue pool below, has been dubbed the Red Dragon. Fitted with a mezzanine floor and enlarged with a new four-storey extension at the back, the new space challenges the traditional form of shophouses. Another red staircase, a spiral within a rectangular shell, stands in the extension. In this space, there is an art gallery-like ambience with the red staircases appearing like sculptures. 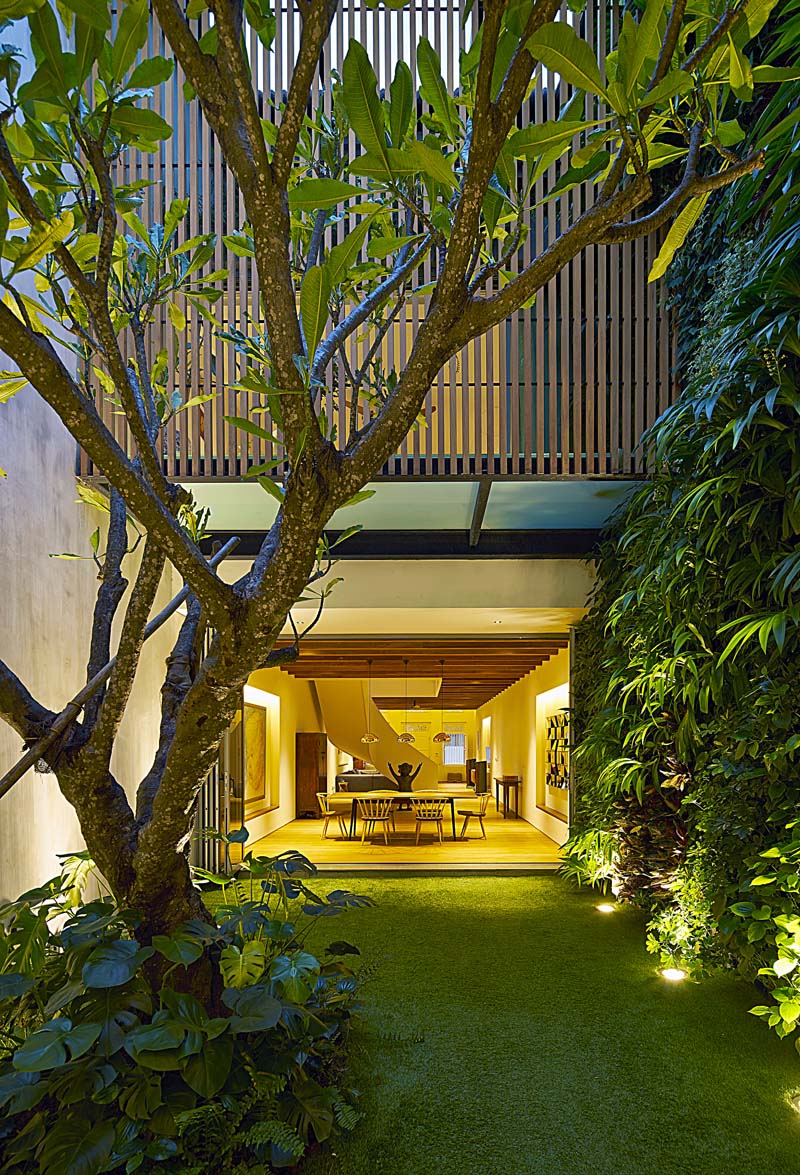 When Chang Architects was commissioned to work on the Lucky Shophouse, though, there were several considerations to be made. Located at the Joo Chiat district, the shophouse was once home to a bookshop called The Lucky Book Store. The new owners of the property had memories of visiting the bookstore in their younger years and so wanted traces of it to be kept. So Chang Architects peeled away layers of paint the property has had down to its original colour. A painted signage, Lucky Book Store, in a serif font, on a pillar out front was retained as a reminder of its history. While steeped in nostalgia, the home is as contemporary as it could be. The couple had bought the rear vacant land, so there was additional room for a garden at the back. The interior was gutted to create a double-volume space in the dining area, and the brick walls and reminders of the old partitions on the walls were exposed and retained. 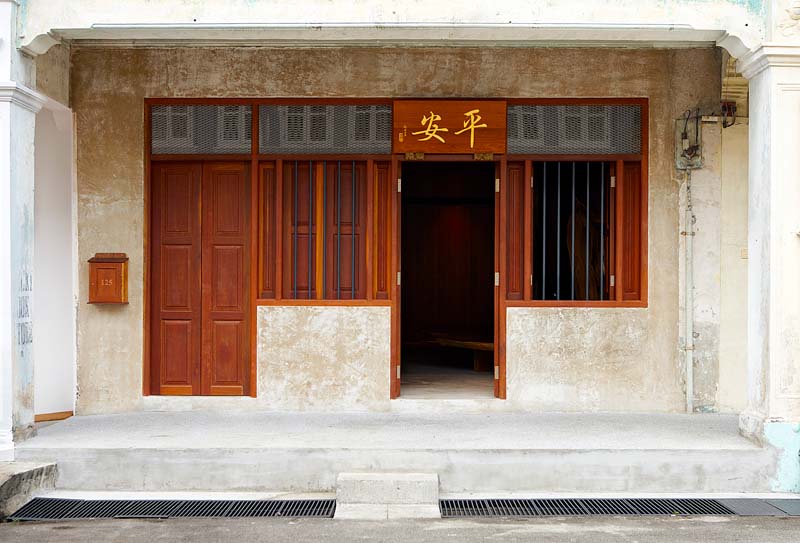 While there are guidelines to follow, homeowners and architects do have leeway, and so creative license, on what to do with the interior and rear of the house. However, seeking balance and treading the line between the sensitivities and contrasts of old and new are essential. “The key is for the additions to be in sync with the existing. This does not necessary mean to replicate the old, but how the new could sit harmoniously with the old without appearing as dated as the old, but with a clear distinction of the new from the old,” Chang explains. “It is about bringing to light the essence of a place, without the need for decorations.”